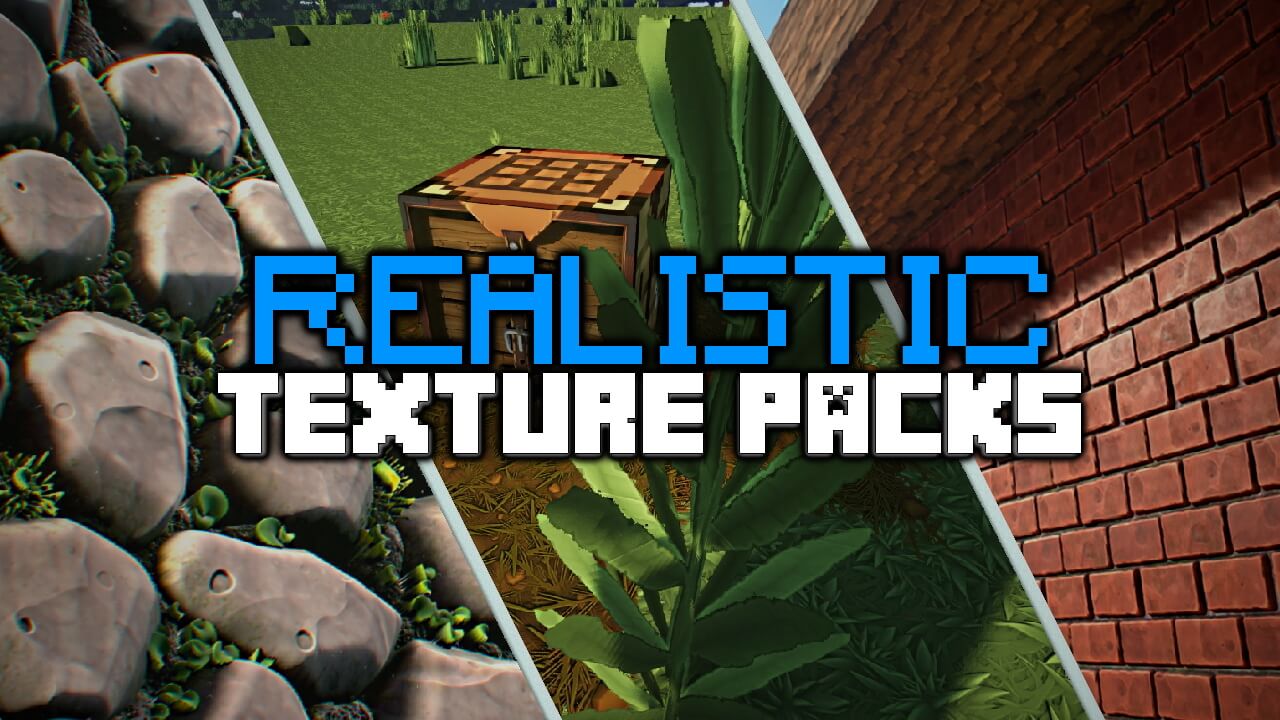 Often people make fun of Minecraft because they think it doesn’t look like a real video game. According to them, everything is just pixels and the textures don’t look nice. Some even claim that the game graphics look like in a game from the 90s. Today we want to convince each of them otherwise, because realistic texture packs will make Minecraft graphics look much better. Many of them are quite modern and encourage you to build a futuristic building. Others are more medieval, but still have some realism to offer. Our personal favorite are photo-realistic texture packs. You can see that there are different styles in this category. One thing they all have in common is that they add new paintings that are so great that they could hang in your real life bedroom.

We have received some feedback from players that they thought they were in real life and not in Minecraft. You shouldn’t take these comments too seriously, but it’s still somewhat true, because the graphics are really much more lifelike now.

Furthermore, you should keep in mind that resolutions like 512x and 1024x require very good hardware to get high FPS and no lags. Therefore, it is advisable to choose a resolution that works with your graphics card without problems, otherwise it won’t be enjoyable. We recommend that you take your time to look around and see what you can find. Then you can test the realistic texture pack yourself and see if you really like the details of it. Of course, we are aware that not everyone has a good computer, so in our list you will also find a few packs that are perfect for poor computers.

After the installation you will ask yourself: Is this still Minecraft or already Next-Gen? First of all, we need to explain how to download the texture packs with realistic textures. Basically, it’s quite simple, because we’ve made a list that includes only the best packs. Of course, only the ones that are definitely state-of-the-art and had no bugs in our tests were included in our list. Pick a few and click the download button.

However, such highly optimized textures also have their price, because sometimes the best versions are only available via Patreon. This is no reason for you to be worried, because every realistic texture pack has at least one free version and most of them are completely free. At first, it may sound incomprehensible to you when a creator charges money for a mod or resource pack, but you should respect this decision. Many of them make a living out of it and it takes time to create such extremely good textures in Photoshop. Some even support POM. If you don’t know what that is, it’s a feature that adds a cool 3D effect to the blocks. For this you need ultra-realistic shaders that support parallax occlusion mapping. This allows you to discover more depth in the blocks that were not visible before.

In general, we recommend using a shader pack to make the game graphics more stunning. We can say that shaders makes the water, the sky and the shadows more beautiful. The best of them also include the bump mapping and ray tracing features. For sure, you’ll push your PC and Minecraft to the limit with them.

We are aware that the majority of players now play the Bedrock Edition. But the most popular Minecraft texture packs are only available for free for the Java Edition, which is logically a problem for many. For this reason, we have created a tutorial. You can convert Java packs to Bedrock and play with them in Minecraft PE, which is really great. If you are a player of this edition, then you should definitely check out this tutorial.

Why should I use a realistic texture pack?

Realistic texture packs transform Minecraft into a realistic design and make the game look more realistic. As a result, the blocks and items look much more lifelike.

What is the difference between a classic pack and a realistic pack?

Basically there are no big differences, but realistic packs need more power because they have a higher resolution and require a powerful PC.