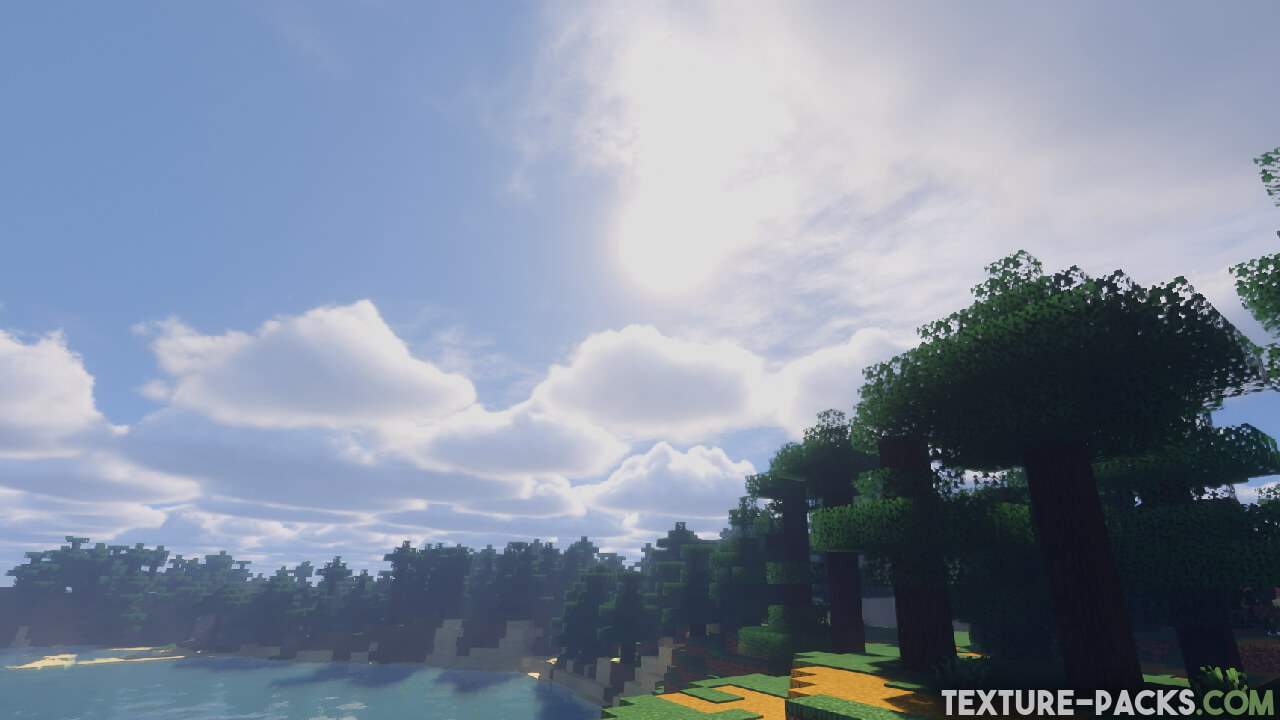 Do you ever find yourself wanting to get away from it all? Of course you do, you’re reading an article on Minecraft, one of the best video games of all time to escape through. But seriously, we get it, sometimes you just need somewhere you can escape to. In this article, we’re going to be quickly talking about a very cool shader we just found, called the Voyager shaders for Minecraft.

Google defines the word “voyage” with: “a long journey involving travel by sea or in space”, and in our professional opinion, the Voyager shader pack definitely lives up to its title. Shaders that attempt to make Minecraft look more like real life are nothing new, there are definitely a lot of shaders that do this already like SEUS shaders and Continuum shaders. However, what got our interest regarding this one is how it almost seems to be going for neither 100% realism, nor 100% stylization.

Instead, Voyager seems to be looking to carve a niche out for itself as a great mid-to-high-range shader pack for Minecraft that is extremely approachable and beginner friendly. It is perfectly usable on low-end devices with a small amount of RAM. We tested the pack in the latest Minecraft version and got no lags.

Here’s some quick information if you’re still fresh to the Minecraft modding scene: Minecraft is a game that’s been out for a long, long time now. Mojang has been kind enough to continue updating the game in order to add more things to it, as well as improve how it looks visually, but Mojang Studios don’t really care about how “nice” they can get Minecraft to look. What Mojang cares about is how well the game can run, because fewer bugs mean fewer customer complaints that they have to deal with. That’s just our opinion anyways, you can let us know if you see things differently.

So anyways, it’s not uncommon at all for gamers of all walks of life to talk it upon themselves to install mods for Minecraft in order to customize the look of the game a little bit and to get that little bit of extra graphical fidelity that Minecraft still seems so desperately in need of. Maybe someday we’ll have an official Minecraft mod library like InstantMods for the game, but that day isn’t today. So for now, users need to take a few steps on their own to get their Minecraft world looking truly great.

Installing mods nowadays isn’t too complicated, and it’s not something we’re really going to touch on here. This review article is all about the Voyager shader pack for Minecraft, our general thoughts on it, and some ideas of who this might be for, and if it will be a good fit for you or not. If you’re curious, just keep reading.

However, one feature that stands out about this pack is the beautiful Skybox included in it. The daytime sky looks like real life, but in an odd way, it almost looks like a photograph of clouds, not actual clouds. This kind of look won’t be for everyone, but we personally love it as it gives the game a sort of dream-like feel. And that feeling is going to persist throughout our look through what this shader pack is capable of. Interestingly the clouds are actually animated, but again it’s done in this very cool dream-like way that we’re fans of.

The night sky looks just as gorgeous, littered with hundreds of tiny stars, a luxury that Minecraft city-goers won’t be able to appreciate in their real day-to-day, sadly. The nights in this game are extremely cozy as the fires are able to produce these nice soothing color schemes across the walls. Hostile mobs stand out against their environments, although this seems to be intentional, so if you’re tired of spiders sneaking up on you this might be another positive for you to consider.

Another great feature we really like about the Voyager shader is the way it handles snow. Lots of other shaders just turn snow into a mess, but the Voyager pack does a perfect job of capturing that freshly-fallen snowy winter stillness in a way that is hard to put into words. This is a difficult thing for algorithmic shaders to accomplish, so it’s clear some of the human element went into what we’re able to observe here.

We haven’t even talked about the creator of this shader pack yet. The creator of the Voyager shaders for Minecraft goes by the name “symbiome67”. The french creator from Alsace has taken great care to make sure that the shader pack is compatible with as many versions of Minecraft as possible. However, it currently only supports some selected versions of OptiFine, so make sure you’re running with one of the compatible versions before you go ahead and download this one. Only OptiFine versions higher than 1.16.5 are supported. Therefore you cannot use the pack in 1.8.9 for example.

By the way, the developer published a revamped version called Voyager shaders 2.0 in 2021. All 2.0 files work with NVIDIA and AMD graphics cards.

The voyager 2.0 shader pack is also compatible with Iris, which is another mod you can get for Minecraft that promises increased framerates and reduced lag spikes. Iris is a Minecraft tool that has been around for a little while now, and it’s really cool to see modders like symbiome67 take these additional tools into consideration. In addition to supporting the Iris mod, there is also an extensive list of other supported mods:

Because it’s a shader pack this means of course that you aren’t just getting enhanced lighting and skyboxes for Minecraft, you’re of course going to get several nice quality-of-life improvements, such as simulated wind both for bushes and trees as well as all sources of water that are exposed to the elements. You can see all the new features in the screenshots and in the YouTube showcase video.

That’s going to about do it for this article on Minecraft’s Voyager shader pack. While it might not be crammed with features the same way some other shader packs for Minecraft are, we think this is a terrific starting point that is going to be especially useful to people who are newer to the Minecraft modding scene. Definitely check this one out if you get the chance.

How to install Voyager Shaders

After the installation, you have the choice between the profiles extreme, ultra, high, medium, and low. You can also customize the settings for light, terrain, gameplay, atmosphere, and camera in the shader options.

✔️ None of the files are hosted on our server. All direct download links on our website are provided by the authors. The packs are free of viruses. Therefore, they are completely safe and secure.
✔️ Please share this post on social media.
✔️ Are there any thoughts you’d like to share? Please write a comment and rate the shaders to help the authors.
👨‍💻 Symbiome67 is the author. Rate this pack:
3.8/5 - (6 votes)