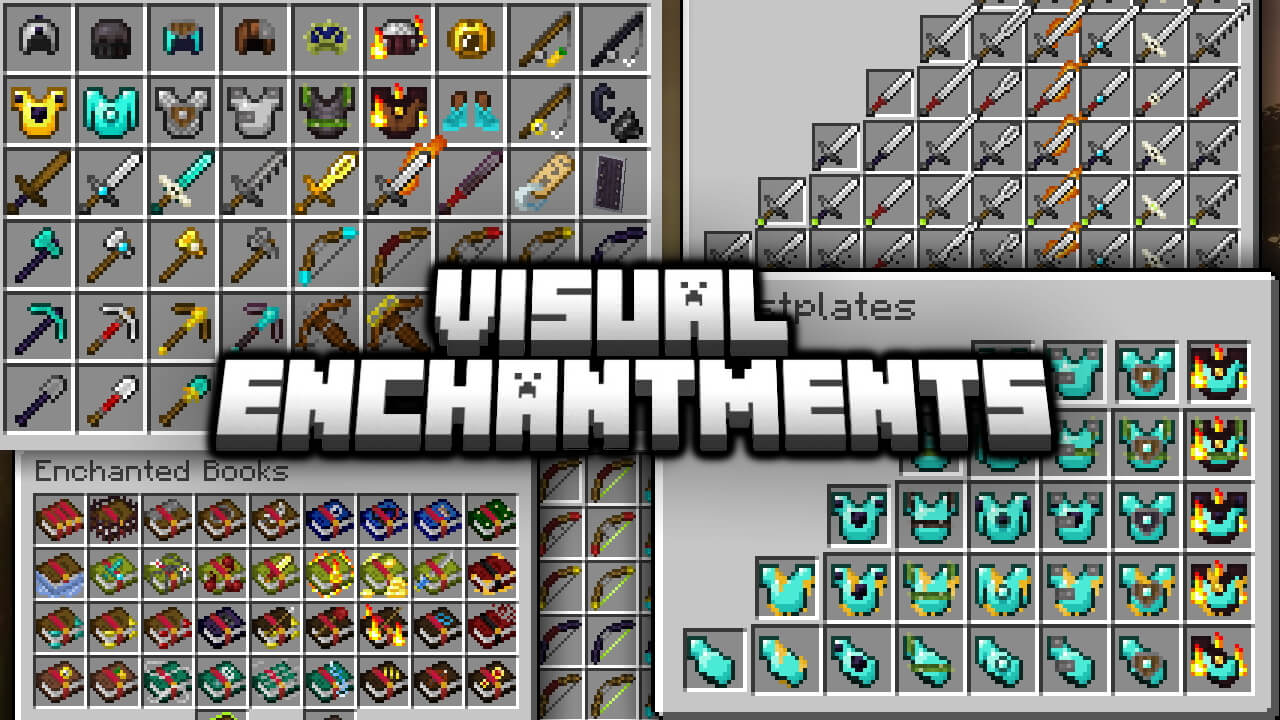 In one of our latest reviews, we covered Xalis Enchanted Books texture pack that did a great job of making Minecraft’s enchanting systems more accessible to players. In this article, we’re going to be covering another pack for enchantment that looks to further improve the way enchanting in Minecraft feels. When you enchant an item, the pack displays a texture that visually shows which enchantment was applied to the item. It’s called the Visual Enchantments texture pack, and it was made by author SiscuLog, who plays Minecraft since 2014.

Imagine you’re lost in the woods, and you realize that it’s getting dark. Nightfall is upon you, and you need to find some armor to put on, and fast. It sounds like there might be a creeper nearby, so you decide it’s best if you look for your Blast Protection armor. But to your dismay, when you look in your bag, you can clearly see that you have armor, but you don’t have any quick way of being able to tell the difference between one and the other. The creeper attacks, you explode and it’s game over.

This would be a situation that wouldn’t happen in real life (which is why we used a creeper as an example), but we feel this story provides a decent example of what it’s like when you’re playing Minecraft, and you need to make a decision like this really quickly, and because of a few tiny issues with the game, you aren’t able to make the right choice in time.

This problem is solved with the Visual Enchantments resource pack. It should be said that if you don’t spend any time whatsoever in dealing with enchantment textures, this pack might not be of much interest to you. However, do keep in mind that if you are in multiplayer lobbies with other people who give you enchanted armor and tools, you would benefit from having this texture pack installed.

Well, you may or may not already be familiar with the enchantment process in Minecraft. We won’t get into details here, but basically, it involves taking one item, imbuing it with magic, and getting the same item back with improved or different capabilities. For example, if you enchant your armor, you could obtain an enchantment called Frost Walker, which turns all the ground underneath wherever you walk into the snow. Or, you could get a different enchantment like Soul Speed, which speeds up your character’s walking speed on sand and soil.

Besides enchanting armor, enchantments work on weapons and tools as well. There are a number of reasons why a player would want to seek out enchantments; for a different experience, for a challenge, but usually the main reason players want enchantments is for convenience. It’s much easier to tackle big projects and clear hard-to-beat areas if you have the right gear for it, after all.

What is the Visual Enchantments Texture Pack?

Normally if you just have the basic version of Minecraft installed, all of your armor will look identical when you look at it in your menu. Let’s use a piece of chest armor for example. If you look at it in your menu in the vanilla version of the game, you’ll see that it looks like a gray, uninspired piece of chest armor both before and after enchantments.

However, with Visual Enchanted texture pack for Minecraft, that all changes. Great care and effort have been put into this project to make sure that all the icons for the items not only look appropriate for what they each represent but also match the pixel art style of Minecraft without mods, so it almost looks like something that Mojang forgot to include.

It should also be stated that the visual appearance of the armor, weapons and tools in-game has been updated as well, so if you don’t have any conflicting skin packs or mods, you’ll be able to see the visual changes on your skin depending on what you decide to have your character use. This is a really cool feature that makes Minecraft feel much more like a traditional RPG where you would expect your character’s appearance to update each time you get a new set of gear.

Apart from that, there really isn’t too much else to cover here. The pack includes new custom sprites for helmets, chest plates, boots, swords, pickaxes, bows, fishing rods, and all the other enchantable items available to the player in the vanilla version of Minecraft. Some textures are even in 3D and make Minecraft aesthetic. Our favorite is the flame bow which is visualized by an animated flame arrow. Furthermore, you have advantages in PvP. You can see with the Visual Enchantments texture pack what other players have equipped. This is more helpful than the features of most other PvP resource packs.

Is there a chance Mojang could eventually patch Minecraft and include an update similar to this? Sure, but given that enchantments have existed in the game for many years now, the odds of any meaningful updates like this are pretty low. For this reason, we’d definitely recommend you check out Visual Enchantments if you spend any time at all around enchanted items, like weapons and tools, in Minecraft. Save time and find that precious tool in your chest fast. Also, the new animations are very cool!

If you like to enhance vanilla Minecraft, try out Stay True, Visible Ores and Better Dogs. All of them make small improvements to the gameplay, keep the vanilla 16x16 style and are OptiFine texture packs.

This is still a somewhat new project, so there are occasional bugs that you might encounter, such as multiple sets of armor not appearing if you decide to mix-and-match different sets. But these are minor nitpicks that don’t really affect how cool and useful this Visual Enchantment texture pack is. More frequent issues:

The game may tell you during the installation that the pack was made for a newer or older Minecraft version. This is an error and you can still activate the pack. After the installation, you can go to an enchantment table and have fun with the new enchanting textures. Enchantments will be shown visually in item form and worn.

✔️ None of the files are hosted on our server. All direct download links on our website are provided by the authors. The packs are free of viruses. Therefore, they are completely safe and secure.
✔️ Please share this post on social media.
✔️ Are there any thoughts you’d like to share? Please write a comment and rate the pack to help the authors.
👨‍💻 SiscuLog is the author. Rate this pack:
4.1/5 - (11 votes)