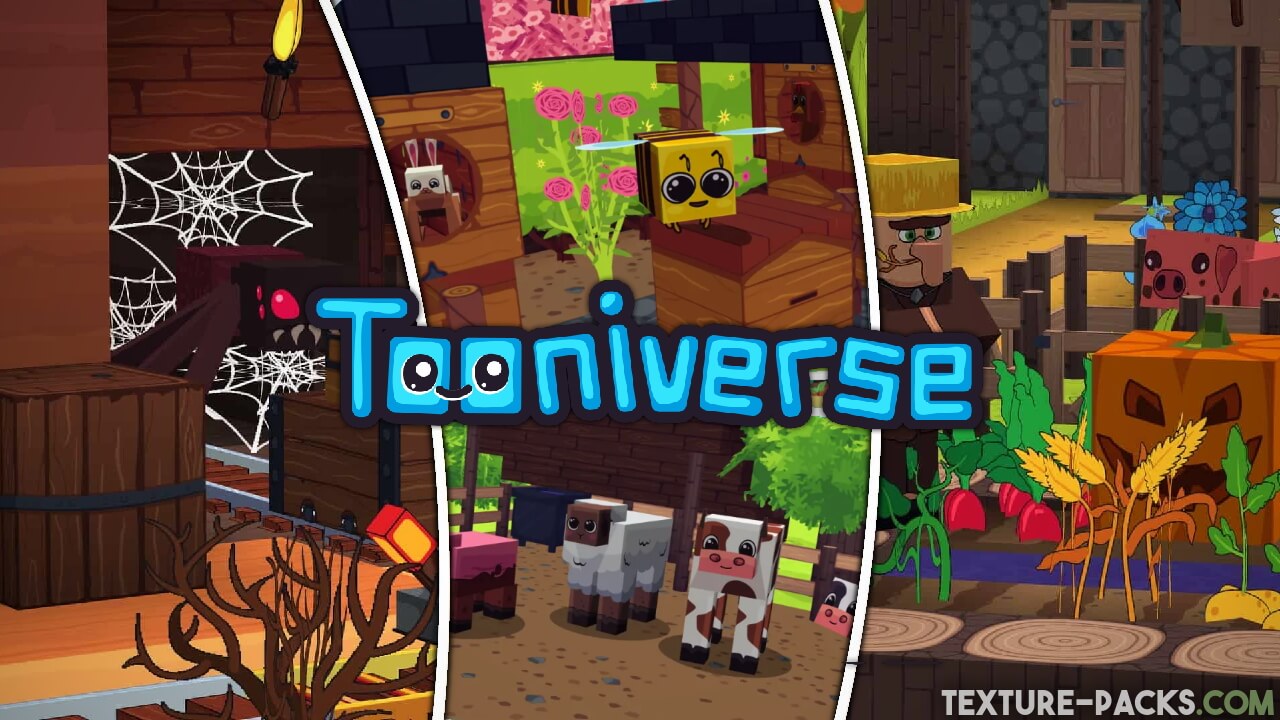 Many people who play Minecraft would consider it to already be a very “cartoony” game. After all, nothing in Minecraft is meant to be seen as real. Everything within the game world is an approximation of something real that exists within reality. Living people and animals are rendered into their most basic shapes and colors so that you can still understand what you’re looking at, whereas these things in reality have much more detail. Today, we want to talk with you all about an amazing pack we feel you should know more about called Tooniverse texture pack.

Tooniverse is a cartoon texture pack meant to be played with the most current versions of Minecraft. It’s developed by “Daft-Vader”, and it features textures that will completely overhaul the appearance of Minecraft. Some Minecraft texture mods are subtle, and you can’t really tell the difference. Not Tooniverse. Tooniverse is loud and expressive, and it will transform your Minecraft experience into something that might not even resemble Minecraft anymore by the time you have it installed.

There’s a certain cartoony flavor to these new textures, and you can really tell that Daft-Vader put their heart and soul into this project. Animals like the Foxes and Cows look super cute and fantastic with these new textures, and the rest of the environments change so much it basically looks like a completely new game, almost like something out of, well, a cartoon.

These graphics specifically remind us of a simpler time in animation and media. The Tooniverse resource pack is attempting to recapture some of this nostalgic joy in a sense, but it isn’t going so far back in time that we miss out on basic color. Think more of the Loony Tunes era of cartoons. Things are bright and cheery, as well as extremely inviting.

If you’re someone who gets scared easily, this texture pack might end up being a good solution for those problems as well since it makes the game world inherently less scary. Dark places are still dark, but the loud and booming textures make it obvious where you are at any given time. The enemies also come across as more huggable and less scary, which might actually end up being a bad thing if you let down your guard around, let’s say, an enderman who happens to look particularly inviting.

Daft-Vader, the creator of the Tooniverse texture pack, also has many other projects, although Tooniverse is by far their most popular. This is a good sign, as it shows that this is a creator with lots of prior experience, and they’ll be more knowledgeable and responsible when it comes to implementing updates than many other creators may be. It is unfortunately common within the Minecraft modding community for amazing projects to go outdated, but that doesn’t seem to be the case with the Tooniverse texture pack, which seems to be getting updated constantly.

The textures of characters and objects on the ground aren’t the only things that have been updated, this texture pack also features a very nice-looking sky with a cheery-looking sun (thankfully much less creepy than the one from Teletubbies), and the demo video for this texture pack shows off a ton of what is within the pack, including skeleton horses, abandoned Minecart tracks, and enderman encampments.

One of our favorite things about this pack is something really simple, but it can’t be overstated. It’s art. When it comes to art, and what constitutes “good art”, this is obviously something that is extremely subjective, but we personally believe this mod has some of the nicest most balanced art of any texture pack we’ve seen in Minecraft in a long time. Are these textures for everybody? No, of course not. If you want a more realistic experience you would be far better off downloading a texture pack that reflects this gritty realism. But since this is so in cartoon style, honestly even default Minecraft textures come with more realism.

Depending on your mood this can be either a good thing or a bad thing, but personally, we’ve played so much Minecraft with realistic mods and textures that sometimes we just want a change of pace, and that’s something that the Tooniverse pack really does well. At times it feels like you’re playing a completely different game, while still enjoying all the amazing things that make Minecraft what it is, such as the advanced crafting and housing systems, the animal management systems, and the newer experience and magic systems, all of which feel like enhanced versions of their previous versions when being played with this mod.

Changing the textures of your Minecraft experience may not change the entire game’s systems all at once, but at times you can find yourself getting lost in this new world you’ve created for yourself. Also, if you can find a custom Minecraft shader to play alongside this texture pack, that may be the most optimal cartoon-like experience you can possibly have within Minecraft. Toontown may be dead, but visual experiences like those can certainly live on within the world of Minecraft.

Our recommendation is that if anything in this texture pack looks appealing to you, definitely give it a download. If you don’t like it you’ll know right away, but if you do like it you’ll find yourself being sucked in just like we were when we first discovered this treasure.

How to install Tooniverse Texture Pack

ADVERTISEMENT
✔️ None of the files are hosted on our server. All direct download links on our website are provided by the authors. The packs are free of viruses. Therefore, they are completely safe and secure.
✔️ Please share this post on social media.
✔️ Are there any thoughts you’d like to share? Please write a comment and rate the pack to help the authors.
👨‍💻 Daft-Vader is the author. Rate this pack:
4.2/5 - (12 votes)

Author Link:
Check out the project on the official source